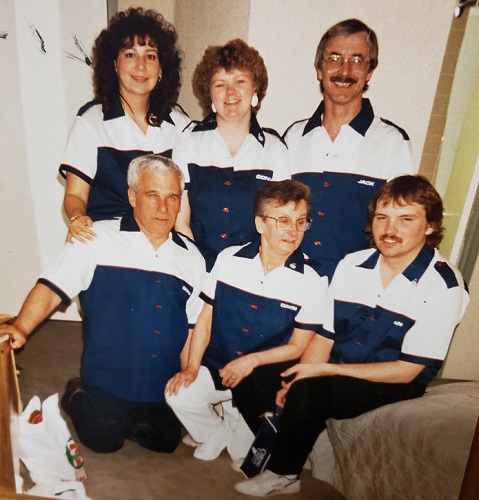 That much was clearly evident at the Celebration of Life gathering that was hosted, a few weeks back, at the venue that has long been owned by Jack and Betty Chokan.

But the cut may run even deeper if the passing of the "friendly as they come" proprietor (March 28th 2021) is followed by the closure of the facility that was as much a home to the Chokans as their nearby residence.

"If you close this facility, it will never re-open again," noted YBC coach Roger Givoque, who along with his wife (Nicky) have spent countless evenings and weekends during the past 26 years, bowling or mentoring young bowlers at Garson Bowl.

"That would be sad."

Few more so than Jack Chokan himself.

"He was a fabulous person," said Arnie Rollins, the man from whom the Chokans originally purchased the lanes back in the late 1980's, a man who went on to enjoy a very special friendship with his fellow bowling fanatic.

"He was such a people person; he would get along with everybody. Jack had the key criteria to run the alley - he had the personality to deal with the public. He just loved bowling families."

Go back to the early sixties in Winnipeg (MB) and you will come across the very first meeting of Jack and Betty Chokan - at a bowling alley, no less.

"Jack was in the army, stationed in Winnipeg," said Betty. "My cousin's daughter played ball and they had a bowling team in downtown Winnipeg and invited me to join."

By 1964, the couple were wed, with Jack catching on with Canadian Marconi and accepting a job in Sept-Isles, Quebec. "The lanes were so bad there that Jack decided not to bowl," said Betty. "He curled and golfed instead - but he really missed bowling."

A move back to Sudbury in 1974 alleviated that anxiety as the couple settled in the Garson area and soon were mainstays at the lanes, the Garson Bowl venue that was built where it still stands, the stripmall plaza just down from the old Falcon Hotel.

It wasn't long before Jack and Betty made those lanes their own.

"There's some alleys that you go into and you just bowl," said Betty. "You make some friends with your team and in your league, and then you leave. I've seen that. Jack would get to know all of the bowlers. When families would come in to bowl, he was almost in the family with them."

"He talked to everybody."

In fact, he talked to the Givoques a lot, though Nicky suggested that the key to the management of the Garson Bowl venue was the way that Betty and Jack merged together. "They complemented each other," she said.

"They are similar in certain aspects, because they are both such giving people. And they both love the sport of bowling. Jack has always been more social - Betty usually sits back a little more."

"Jack was typically more at the forefront of Garson Bowl, where Betty is more in the background - but she would also run it from behind. They, as a team, made Garson Bowl what it is."

When Rollins sold off Garson Bowl, he purchased a centre in Dryden and is now also part-owner of Whitewater Lanes in Azilda. Having competed at tournaments from one coast to the other, few understand the bowling mentality better than Rollins.

"You have friends right across Canada. It's funny, but it's true."

Now 80 years old, Betty Chokan can no longer operate Garson Bowl. She is hoping to find a buyer, but she noted that she has only received one enquiry to date.

And in a year in which we have already lost a local bowling legend, that would be a damn shame.