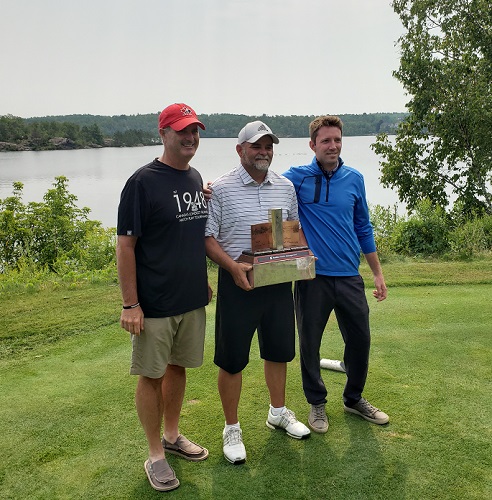 In a summer in which the Idylwylde Invitational would extend over to a Monday final for the first time ever in the 73 year history of the event, itâs probably only fitting that Don Martone and Rob Cowan should go to extra holes.

Down two holes in the championship flight match play final with only three to play, Martone, one of five players from Sault Ste Marie to crack the upper echelon in 2021, completed his comeback, sinking a fifteen foot putt on the second playoff hole for the win.

During a weekend in which the glut of young golfing talent in the north was on full display, it was the steady hand of the 50+ tournament vet that would prevail. âI really didnât change my focus â Iâm always out there just grinding it out,â said Martone, who has qualified for champ flight the past three times (a current record he shares with Kyle Rank).

âI have a pre-shot routine that I stick to. Once we get a number, once we have the yardage, you just go on auto-pilot. I donât differ from it, everything is the same. Under the gun, that suits me well.â

Having also survived five playoff holes in eliminating local Josh Hayes in the quarter-finals, Martone would see the momentum swing with regularity over the course of the last seven or eight holes versus Cowan. A great putt on seventeen, with the 56 year-old son of Gary Cowan (two time US Amateur champion and member of the Canada Sports Hall of Fame) poised to close out the match, came only after Martone initially opened the door.

âI had been having left to right putts all day, but I was still a little frustrated,â said Martone. âI made a rookie mistake off the tee on 17 and didnât put it on the green. I was a little nervous, but Marc (Disano â his caddie and also the SSM native that he knocked off in the semis to advance to the final for the first time) was reading the putts well today.â

Cowan, who last played the Idylwylde course when he was in Sudbury in 2010, part of the field that competed at the Ontario Amateur Championship, was pleasantly surprised to work his way through to the final with victories over Matt Battistoni, Jason Picco and Jay Jewett.

âI wouldnât have pegged myself to make championship flight coming in,â stated the highly accomplished golfer from Wellesley (ON). âNot being here for that long, I had no idea what the number was to make match play, so I figured I would just go out and play.â

âI can get a little squirrely. I had no high hopes, maybe get to match play, any type of match play and then the squirrely shots donât matter quite as much.â

Though he may not match up, yard for yard, with the big thumpers off the tee, Cowan can more than make up for it with a near lethal short game. âI can dial in my wedges pretty good,â he said. âJust hit it in play. Put a wedge in my hand all day and I will be just fine â just donât hit it in the crap.â

Much the same as Martone, years of experience have Cowan now married to a set routine, pretty much each and every shot. âI have my little secret that only Ryder (caddie Ryder Coe) and I know now, how to make sure mentally I am a go â and it works.â

The weekend festivities started with fireworks on Friday.

Two-time champion Kyle Rank and perennial championship flight contender Jay Jewett (qualified 10 times since 2006) paced the field on day one, both at 69, with Picco (70), Hayes (71) and Joe Kremer (71) right on their heels.

In total, thirteen golfers snuck in at 73 or better, leaving a field of eight hopefuls vying for the three final spots. That octet featured 2018 champion Mike Roberts and former Idylwylde club pro Ryan Bastien, but the crowd favourite was undoubtedly Vincent Palladino (Jr), the St Benedict CSS senior who was the last man eliminated Friday night.

The fact that a Saultite ultimately claimed the hardware is perhaps no shock, their presence among the tournament elite a testament to the golf currently being played in the Lock City. âWith Mike (Moraca) and Ryan (Bastien) and the guys at the Sault Club, theyâve got a pretty good group of guys that play on Tuesday night,â said Martone.

âMarc (Disano) and I play up at Crimson Ridge â so thereâs a good mix.â

No stranger to hoisting the hardware in his hometown tournaments, Martone suggested that emerging this past weekend at the tradition that is the Idylwylde Invitational compares quite favourably to his SSM accomplishments. âThis tournament is right up there at the top,â he said.

âIâve won the tournament back home, but this is such a strong field. To beat all of these guys and be the last man standing, itâs pretty special.â